A downloadable game for Windows and macOS

After they've failed to seal the Underworld Goddess Duessa forever, a new prophecy was born. A prophecy of a hero, destined to save the world. But he is just a child.. How much power does he truly have? And.. who is the girl, next to him..?

A classical RPG in a medieval-fantasy setting.

- This is Part 1: Exorcist's Path - The Prophecy

For SE credits and links to more wonderful assets, please check the file inside the game folder.

"Not your usual character classes, and the effort creating this game from mapping to battles can't be ignored." ~ cm

I've been playing RPG's a lot for years and I am so familiar and kind of tired seeing classes with Swordsman, Hunter, Cleric, Assassin (and so on) in games. Gladly Exorcist's Path is different and kind of refreshing for me. I like the name with the job classes in the characters at the start of the game, as I said, refreshing or new to me.

The intro music while doing some rituals is right and fits the scene. There's a background music in the later part of the game where it kind of a bit distracting and it doesn't fit the atmosphere of the game. The vocals singing while talking to the ghost lady distracted me from feeling the right emotion in the scene with the two main characters, the spirit shaman, and the ghost lady.
The vocal background music takes away the right feeling in that scene, for me. I like the intro battle, to make the player introduce the battle gameplay at the start of the playthrough. The plot is not that unique but still the entire story is something refreshing for me, so that's good. I like the changing of music at the house scene. I like the sound effects like the one in the blacksmith.

I like the face assets of the characters, not the usual ones. Some has faces, some has bust, not consistent but still, good job. The mapping is well done and has a lot of effort put into it. It shows. I know it can still improve more in future updates. I also love the tilesets. Well done. The Menu is simple yet organize.

The game is a balance between good battle gameplay and good story and characters. The dev. puts a lot of effort in the battle from HUD's, skills, sprites, weather effects and more. Well done.

All in all, the game deserves an applause for the great effort put into it, for making it not the same RPG's out there. Honestly, the game is way better when it comes to graphics, story, characters, so on...than those commercial RPG Makers on STEAM. This is atleast for me, looks like a commercial game in its earlier versions. If the dev. will still continue to improve it, and I hope she will, it can sell commercially, specially for die hard RPG maker fans and RPG fans out there who wants to try and play something new, something fresh from the usual same old classes and stories.

To the dev. Jennifer, I'm happy for you. I always knew that you can make great looking and playing games. For an RPG Maker game, this is a commercial quality for me, but please improve it more. Improve the maps, characters, dialogues, if side-view is the final battle style, then I think it's enough for me. Just improve it to its best possible quality. Just giving an idea though, you can also make those 4 characters at the start of the game as main characters in the entire playthrough or make a new game about them and their journey, and use a Lecode Tactical Battle System (LeTBS plugin), I think it can become a great game on its own with unique job classes and skills. Just an idea for you to think about.

Anyway, great job...thank you and congrats! Thumbs Up for me.

I will see what I can do with the other characters. Already planned for the remaining 2 parts of the game cutscenes, where the player can navigate es one (or 2) of them - mostly as scenes of the past - in order to get to know their background story and even more of their personality.

Thanks for taking the time to play and review Exorcist's Path :)

Oh and.. as for the ghost scene.. although you're the first one mentioning it, I think you're totally right! Probably a replacement with a slow pure piano BGM would fit much better. Thanks!

That is just a suggestion to think about. We both know that music play a big part in setting the mood and atmosphere of a story or world. A sad melodramatic and subtle background music is nice for a sad scene. I know you know it. Good luck on improving the game and looking forward to try your future projects. ☕

This is a sample LeTBS in a game.

I had so much fun playing this game. Let me get into my review:

The music for this game is well picked. I love how there are even voice included in some of the BGM. The whole music gives the vibe that I am playing something good!

I like the story. It's a classic good and evil, but a fresh tone to it by the delivery of the game makes this game enjoyable to play and see what happens to Duessa and the other characters.

Oh thank you so much! (And sorry, I just seen the comment now)

I've also done a few fixes already, but still need to upload ^^ And for part 2 there's even some custom art in work.. >_<

Downloaded...playing but one problem...can't save at all during demo. Other than game running a little slow, the art, music and story line are simply fantastic!!! The battle system is great, the red center area is hard to hit sometimes lol can't get distracted by my cat while battling again lol. Since I can't save I might just stop and wait for full game as I don't have time to restart demo. Please continue on with finishing this awesome game so I can buy!!!

Hi, thank you alot for trying the game and the feedback! :) The first save should be possible after creating the protagonists. I thought it was early enough, but it won't hurt, including another save just before the first battle. Thank you for pointing this out ^^
As for the first battle, it's okay to just use with Vishna the Poisonous Seed, this will do the most damage to Duessa. The other attacks rather serve to get familiar with the timed attacks (but the poison will definitely "defeat" her >D). I maybe should include a hint :D

Btw, the game will be always free, even when finished. I'm just happy when people enjoy my game ^_^ Thank you so much for playing ~

Finished the demo, loved it!!! Can we make a donation then? Thanks for the quick reply. No saves were available throughout from beginning to end. When this is finished, I'd like to refer your game on Aldorlea in the indie game section if that's ok?

Good luck on finishing soon and I will be glad to spread the word for you!!!

Thank you so much again for your support and your patience!

I can't receive donations at this point, as it would require the permission of the artist who made the protagonists. So far he only allows a non commercial use and seems to be inactive. But I much appreciate the thought <3

There is no problem and no need to ask for sharing the game. I'd appreciate it alot and am happy about every player who will give it a try. ~

I'm glad you could finish the demo. However, I don't understand why saves weren't available? What exactly happened when you tried to save through the menu? And did the dialogue box, asking you to save, pop up at all?

Because here it is working, and referring to the video, Cayte made, the player also was able to save. So I am wondering, what exactly caused it, that you couldn't.

Anyway, thank you again! And have a wonderful day~

Just kept getting that buzz sound that it wouldn't save. Same on pop up on automatic save points and trying from menu. Apologies for not being able to help much. Thanks!

Alright, I will ask around, if anyone else might have an idea what could possibly cause this.
If it's not too much of a hassle, would you mind, to redownload the game and try again maybe? or even on another computer, if you have access to another, and see if it's working.

Thank you! And sorry, it is hard to see the issue here. I redownloaded the file myself again, to check it, but it's working as intented.

One thing you could try to check is the folder, where you installed the game. Some (like "program files") seem to require extra permissions and can cause issues, upon trying to save (someone pointed this out, after I've been asking; I havent thought of that).

So if that's the case, you could try, if running the game from a different location fixes the issue (I run it directly from my desktop for example).

Looks good. Can't wait to play and test it in the near future but for now congratulations! ☕

Thanks alot, my friend <3

I really love the story, the art style, the music, basically everything! (●♡∀♡))ヾ☆*。

Especially how there's interaction when casting a skill. Really looking forward for the full version!

Thank you so much! After so much work I am really happy to read such positive feedback <3 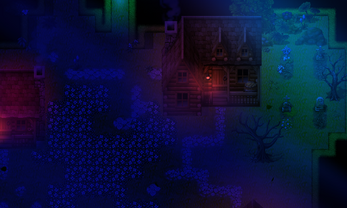 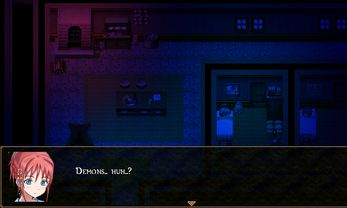 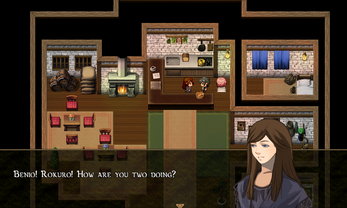 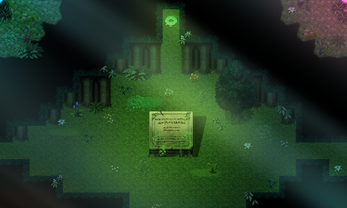