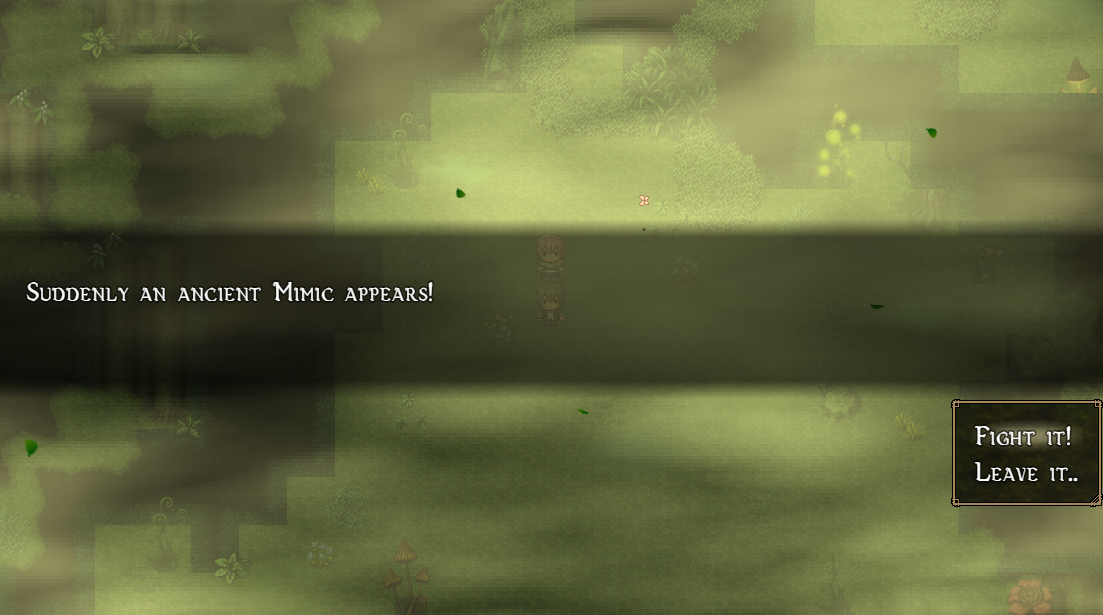 Many loved them (including myself), others hated them. Now it's up to the player self, if he'd like to play with or without them. For further infos about this change please check THIS POST.

Mimics have a special purpose. These hostile treasure chests appear by chance, after the player has defeated a random encounter. They are tanky, but their damage output is low. Also the player has the option to ignore them. However, this is not recommended, as Mimics reward the player with 1 of 8 Bronze Weapons, once they've been defeated.

The 8 different Bronze Weapons can be upgraded 3 times each with their respective catalyst (Whetstone, Cobalt or Fairy Feather). Besides this their stats are pretty decent for being starter weapons.

But not only weapons have been added! There's also now a whole new Bronze Equipment Set. Armor pieces are blessed by a random suffix, while for each piece exists 1 very powerful Suffix. I won't list them here, as it's probably more exciting to come accross them by chance in the game, without having to specifically farm for them. Armor pieces cannot be upgraded.

Both - weapons and armors - can be disassembled in order to receive raw materials, which can be sold then to specific NPCs (like the Blacksmith). Also there is a small chance to receive upgrade material for weapons. In case of feeling unlucky with disassembling, there's also the option, to buy upgrade material from Wayland.

In order to make battles abit more interesting, 2 Melee Skills have been added. At some point during the Story the player will receive 2 Runes from the padre. These runes can be used on an actor; the actor will then learn the ability. The choice is totally up to the player, who should learn which skill. It's also possible, to make a single actor learn both abilities.

Now the tutorial battle is actually recognizable as a tutorial battle. Further added a Manual to the Blacksmith's Shop, which explains the new equipment mechanics.

Many players told me, they didn't like how slow the text was. So slow text is removed. There're still pauses here and there and I'll take a look into them, but as of now, that's not my priority, as I'd like first to focus on finishing part 2 of Exorcist's Path. Also of course have been done some bug fixes (in fact 1 bug turned into an easter egg) and a few text corrections.

That's it - unless I forgot something.

Hope you enjoy the update~

Get Exorcist's Path: The Prophecy

Still a child, yet to be chosen, to save the world..